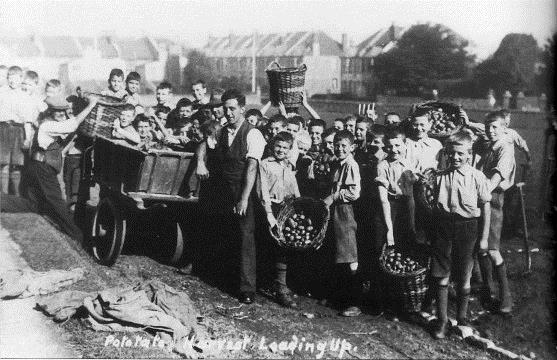 In 1832, George Muller arrived in Bristol, England to take charge of a small church called Bathesda Chapel where he served for 64 years until his death in 1896. Early in his work at Bathesda, Muller was struck by the overwhelming number of orphans who roamed the streets with nowhere to go for food and shelter.

In this era of Britain’s Industrial Revolution, children as young as seven years old were forced to work in dangerous factories in horrible conditions. It was not uncommon for orphans to lose their lives in this state-sponsored child labor environment. Some of the boys and girls were forced to work as chimney sweeps in the most deplorable conditions. They were a type of indentured servant, bought by the chimney sweep master from financially poor parents. According to information gathered from various chimney sweep websites, these young chimney sweeps were to climb up, inside the chimney, brushing the flue as they went, and they weren’t done until their heads poked out of the chimney top. Due to their fear, these children were often reluctant to climb up the chimney. In order to motivate them, many masters would force the child up the flue and then light a fire. Since the child couldn’t come down, they had no choice but to climb up the flue. If a child happened to die while inside the chimney, another child was sent up the flue to help remove the deceased child.

Moved by what he saw, George Muller felt called to make a difference in the lives of the many ragged children running wild in the streets destined for slavery and forced labor. At a public meeting on December 9, 1835, Muller communicated his vision to his congregation about starting an orphanage. On April 11, 1836, Muller opened the doors of his first orphanage where he took in 26 children. Seven months later, on November 28, 1836, the second orphanage opened. In September of 1837, a third orphanage was opened. Over the years, more than 10,000 orphans were housed in the orphanage started by Muller. Not only did Muller provide food and shelter, he also provided an education to over 120,000 children through the 117 schools he established. He was actually accused of raising the poor above their natural station in life. At his funeral in 1896, the streets were lined with multiple thousands of people, some having climbed trees lining the funeral procession, attempting to get one last glimpse at the man who cared enough to make a difference.

The Power of Purpose
People and teams need purpose. They not only need to ask the question but need to have an answer for, “why do we exist?” An NFL team coming out of training camp and into the regular season lacking purpose will lack the passion and direction to reach the game of games, the Super Bowl. Studies show that people without purpose are vulnerable to boredom, anxiety and depression. Without purpose, individuals will drift aimlessly through life and through their professional careers. When people have purpose, they have focus, direction, desire, aspiration, resolve, determination, tenacity and a will to achieve. They are not deterred by setbacks, delays, or impediments. Fredrick Nietzsche, the German philosopher said, “He who has a why, can endure any how.” George Muller had a “why.” His purpose was to lift orphan children out of a life of neglect and slave labor by providing them with food, shelter, education, and an understanding of their purpose in life.

The Power of Passion
Passion is the fuel in the engine of purpose. Merriam-Webster Dictionary defines passion as, “a strong feeling of enthusiasm or excitement for something or about doing something.” Author Michael Nolan wrote, “There are many things in life that will catch your eye, but only a few that will catch your heart, pursue these.” Leaders can tap into the passion of their teams by casting vision. Helping others to see the end result of something that’s yet to be accomplished is the key to good vision casting. When George Muller shared his vision for starting an orphanage, he had two schillings in his pocket and never asked a person for a single donation, yet throughout his years in ministry work, he raised what is considered to be over $70 million in today’s dollars. He cast a compelling vision for what could be and then got to work to make it happen.

The Power of People
When people are motivated by a compelling vision, there’s no stopping great things from happening. It’s been said that teamwork makes the dream work. The power of people to accomplish goals and objectives can never be overlooked. Michael Jordan said, “Talent wins games, teamwork and intelligence win championships.”

As leaders in industry and in our communities, may we be alerted to the needs of others and harness the power of purpose, passion and people to meet those needs.